The feasibility of β-1,3/1,6-d-glucans usage as an immunostimulant in the OPTIMEAL diets

THE FEASIBILITY OF β-1,3/1,6-D-GLUCANS USAGE  AS AN IMMUNOSTIMULANT IN THE OPTIMEAL DIETS

On the cell wall of the yeast the upper layer of β-1,3/1,6-D-glucans is covered with a layer of proteins – mannoproteins. In order that β-glucans do not lose and perform their immunostimulatory properties, special technology of purification is needed to remove the layer of mannoproteins. Scholars of the Biotechnology high school (Saul, Korea) and Mycological Center of Tehran University (Tehran, Iran) stated that if a product that contains β-1,3/1,6-D-glucans is insufficiently purified it will not have any effect on the immune system [2, 3]. The mechanism of the of immunostimulatory effect is that β-1,3/1,6-D-glucans connect with receptors on the surface of the leukocytes (macrophages, granulocytes and normal killers). The compound of β-1,3/1,6-D-glucans with macrophage receptorsoccurs on the principles «key and lock». The «key» activates the immune system and stimulates higher antimicrobial activity and cell protection, increases resistance to diseases and reduces the activity of inflammatory processes [4]. Most of the cells of the immune system are located in the intensital mucosa which is an important body-a barrier for the immune system of the body. That is why during oral β-glucan consumption they can may bind to the macrophages of the gastrointestinal tract in Peyer plaques. The activated cells produce cytokines, which help to reduce inflammation activity [5]

Latest researches conducted by the scholars from the State Laboratory of Animal Nutrition at China Agricultural University (Beijing)  stated that oral application of  β-1,3/1,6-D-glucans reduced the concentration of proinflammatory cytokines IL-6 and TNF-α in plasma and increased concentrations of anti-inflammatory cytokine IL-10, indicating their anti-inflammatory effect. So, as a result of the application of β-1,3/1,6-D-glucans the body develops higher antimicrobial activity and cellular protection, increases resistance to diseases and decreases the activity of inflammatory processes [6]. It should be noted that the effect of β-1,3/1,6-D-glucans is adequate enough to activate the immune system without over-stimulation, because it is over-stimulation that often leads to autoimmune diseases. In addition, according to the U.S. Food and Drug Administration (FDA) β-1,3/1,6-D-glucans are safe, even toxicological wise, and can be used both orally and parenterally [7].

Specialists of the epizootology and preventive veterinary medicine at The University of Veterinary Medicine and Pharmacy  (Kosice, Slovakia) in 2011 stated that the usage of β-1,3/1,6-D-глюканів  has significant benefits for the dogs as it increases the strength of the defense system of the organism both for young dogs and old one.у  Conducted research regarding immunostimulative effect of  β-1,3/1,6-D-glucans for puppies during vaccination for parvovirus infections and rabies have established that vaccination, followed by prescription to animals drug β-1,3/1,6-D-glucan orally leads to a significant increase of immunological parameters (phagocytic activity of leukocytes, blastogenic reaction of lymphocytes, chemotaxin and metabolic activity of polymorphonuclear cells). The level of antibodies against parvovirus of dogs and rabies reached statistically higher values on the 28th day in the puppy’s group, which after vaccination orally administered β-1,3/1,6-D - glucan in the form of syrup compared with the control group of animals, receiving only a vaccine. Thus, the drug is based on β-1,3/1,6-D-glucans has an appropriate immunostimulatory effect for puppies and can be used in veterinary practice [8].

Polish scientists from the University of Warmia and Mazury in 2013 also conducted a study to establish the effectiveness of various immunomodulators in the treatment of inflammatory bowel dog disease. The study involved 28 dogs diagnosed with IBD (Inflammatory Bowl Disease).Animals received various immunomodulators: β-1,3/1,6-D-glucans, hydroxy-β-methylbutyrate and levamizole for 42 days. Samples of blood were analyzed before and after therapy to monitor changes in the activity of phagocytes, proliferative response of Mogen-stimulated lymphocytes and levels of γ-globulins, activity of lysozyme, ceruloplasmin, IL-6 and IL-10. In this experiment, usage of β-1,3/1,6-D-glucans had a better therapeutic effect, improving the histopathological parameters of the intestine, reducing IL-6 and increasing IL-10 and extending the remission period for more than six months. Hydroxy-β-methylbutyrate and levamizole also showed efficacy, but the reduction of clinical symptoms was slower and less pronounced compared to the group of animals where β was used-1,3/1,6-D-glucan. Thus, the results of the study indicate the expediency of the use of β-glucan in IBD in dogs [9].

Optimeal nutrition strengthen the immunity of dogs and cats since as the source for purifying β-1,3/1,6-D-glucans is used a feed additive MacroGard. Studies completed in 2017 by Dutch scientists F. Roberti, P. Paap on the effect of macrogard impurities on the body of puppies confirmed its effectiveness to enhance the natural protection of the body, including the combination with vaccination [10, 11]. Therefore, during the analysis of the literature data it was found that β-1,3/1,6-D-glucans have a number of useful properties. β-1,3/1,6-D-glucans found in the yeast cell wall are known for their ability to optimize immune response. In vitro studies show that it is very important to have the correct type and structure of β-1,3/1,6-D-glucans. Commonly used yeast, yeast cultures or complete yeast cell cell products without special treatment have no ability to stimulate immune response. MacroGard is by far the most studied β-1,3/1,6-D-glucan. The product has been intensively studied and proved to be very effective both in vitro testing and use for small Pets, pigs, birds and fish [12-15]. Thus, the use of β-1,3/1,6-d-glucans in Optimal dog and cat feeds are an important and effective mean to stimulate the natural immune response of the animal body and protect it from various diseases. 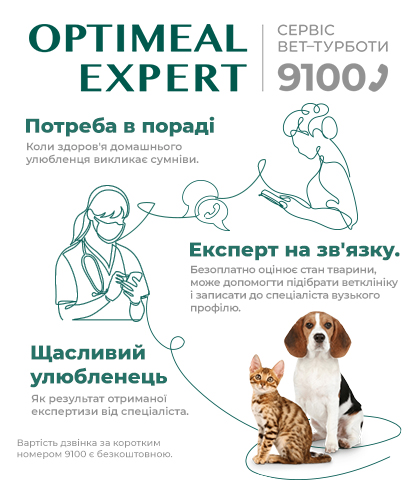